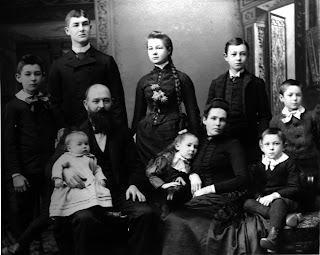 Please excuse this little diversion into family history; the point of the story has less to do with family than with what--stupidity? incompetence?  I don't know. Read on and you decide.

My family has deep roots in Springfield. My great grandfather Emil Schneeloch (that's him with the beard) came here from Germany about the time of the Civil War. He worked for many years at the Springfield Armory. Then later he moved to "the country" (the land along Allen Street west of Bradley Road) and started a farm. The brook that ran through the farm is still known as Schneelock [sic] Brook Many years later Sumner Avenue would be extended passing through what had once been my grandfather's rhubarb patch.

When Emil died in 1928, he left no will, so the property was divided among his children, those who could be found. My grandfather George (the cutie with the white bow tie standing to the right in the back row) was the executor of his estate. When Grandpa died in 1953, there was still one little piece of land left--a very small pie-shaped piece not suitable for anything except maybe growing rhubarb--and because some of the heirs had disappeared, there was no way to get clear title to the estate and sell the property.

My father (also George) consulted a lawyer, his friend Stuart Waite. Stuart recommended just forgetting about that land. He said that the city would eventually take it for back taxes. My parents would have forgotten about it except that every year they would get a tax bill from the city addressed to the Heirs of Emil Schneeloch. They called, explained the situation, yet still the bill kept coming. Eventually they just ignored it.

When my mother died in 2008, I started getting the bill. I decided 80 years was long enough to deal with this nonsense. I called, talked to people, was referred to others. Eventually I was connected to the city's lawyer. After some back and forth, he assured me that it was all taken care of. When my tax bill arrived that year, it was alone. No more bills for Great-Grandpa.

Then the day before July 4th this year I got another letter--this time from a collection agency warning me to pay all Emil's  back taxes or else. Back to City Hall. The man in the Assessors Office couldn't help me, but he did print out a copy of a map of this little piece of land. He sent me up to the lawyer's office, but he wasn't in due to the long holiday weekend. I left copies of the letter, the map, and my card.

Bright and early on Monday morning the lawyer called and assured me that the city was indeed in the process of foreclosing on the property, that I shouldn't worry about the letter, than no one was going to come to arrest me.

I might rest easy if I didn't know all the history of this property, so now I'm going to console myself with a piece of rhubarb pie. 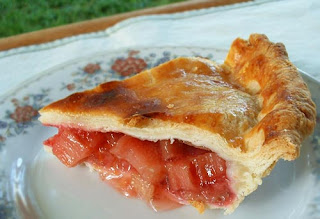 Posted by Jane Schneeloch at 7:23 PM