I’m not sure when the two were blended into one day and labeled Presidents’ Day, or when the apostrophe disappeared. (Being a stubborn old English teacher, I refuse to give up on the apostrophe, but that’s another story). Somewhere in the past fifty years the holidays were merged and moved to a convenient Monday, and here in Massachusetts, anyway, merged into February vacation.

When I think of Washington’s Birthday when I was young, I think of my grandfather who came to live with us after my grandmother died. He was a quiet, kind, and hardworking man—a warm addition to our home. At my grandparents’ home on Allen Street he had had a large garden. There he planted according to the seasons, never putting in tomato plants before Memorial Day (always May 30 back then) when the chance of frost was over.

Our yard was much smaller, but he made the most of it, planting vegetables that we enjoyed throughout the summer. But what I remember about Washington’s Birthday was that that was the day on which he pruned the golden delicious apple tree. Regardless of New England’s fickle weather, he knew that late winter was the best time to get the trees ready for the new season.

My grandfather died in 1953 before vacation considerations or marketing strategies moved holidays around, also before global warming changed the seasons themselves. Even the gardeners at Washington’s own Mount Vernon recognize that the trees that used to become dormant in December no longer do so.

I wonder what Grandpa would think today of all these changes—the calendar, the climate. Even his garden on Allen Street was split in two when Sumner Avenue was extended. Still the memories don’t change of this quiet, faithful man putting on his boots, picking up the saw, and heading toward the apple tree, getting ready for another fruitful season. 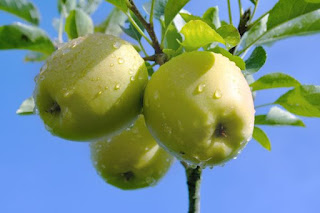 Posted by Jane Schneeloch at 7:26 AM No comments: