Betsy McCall now sits safely on a shelf in an antique cabinet. She is the sole survivor of the many dolls I had as a child. You see, I loved my dolls, but I was curious as to how their arms and legs worked, and in an effort to satisfy my curiosity, I pulled them out to see what was going on inside. That’s when the rubber band either snapped or broke, and another doll joined the list of amputees. I have no idea why it wasn’t until Betsy that I figured out that this was not a good idea, but there she sits.

My dolls were not the only victims of my curiosity. There was also that Big Ben alarm clock that woke me every morning, the one with the brass key stuck in its back that had to be wound every night until it could be turned no more. The illuminated numbers that gathered light during the day and returned it at night as a subtle green glow were familiar, as was the tick tick tick from the inside. 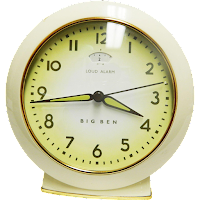 The clock was quite reliable as long as I kept it wound and didn't tamper with it, but, again, I was curious. I wanted to know how it worked. What was happening inside that ivory colored metal case to so regularly keep the time of day and wake me when it was time for school?

I didn't hold any bad feelings for the clock, wasn't angry at being awakened from of a sweet dream, but I wanted to know what was hiding behind that shield.

Taking off the back was easy, just turn the few screws until they came out, then the back was off. From then on it was a matter of prying and pulling the various springs and bells and gears. Dissecting Big Ben to its basic parts took a while, so when I got all the parts separated, I put them in a shoe box, intending to put it all back together in the morning.

The next day I gathered the pieces and fit them together as well as I remembered their proximity to each other. I fit the gears together and made sure the clapper was adjacent to the bell. It all went well until I put the cover back on and noticed a few parts still in the shoebox.

At least Betsy McCall survived. I think there were a couple of other shoe boxes filled with stray alarm clock parts yet to come.

Posted by Jane Schneeloch at 7:23 AM No comments:

I have been reading with dismay the reports coming back from the General Conference of the United Methodist Church, the quadrennial meeting of the international church. It appears that the rift is growing between those who would truly be a church of open doors and those who want to draw hard lines of exclusion. As talk of a split grows, it seems the conference's theme "Therefore, Go" is more than a little ironic.

All this has caused me once again to consider the contrast between the national church and my home church, something I reflected on in a previous post in December of 2013. So I decided to share it once again.

On Christmas Eve after the presents are opened, the dishes loaded into the dishwasher, and the guests have left for home, I will sit for just a minute and look at the tree. Then I will bundle myself up and travel down the road to the candlelight service at church. This is always a highlight of my holiday. The beautiful music, the warm candlelight, and the familiar story of wanderers finding crude shelter where their baby will be born amid the animals all remind me once again of what this season is about.

When I speak here of church, I am speaking of the church I attend nearly every Sunday—Trinity United Methodist Church in Springfield, MA. The stone cathedral structure next to Forest Park is quite recognizable to anyone in the Springfield area. It is a beautiful building, but when I refer to the church, I am really talking about the people there. Everyone from the toddler playing peek-a-boo from two pews up to the man from AA who comes in silently, then leaves. Trinity is a warm and welcoming place.

This is why it pains me so when I hear about the other church—that larger church we are a part of—The United Methodist Church. That church has been in the news lately and not for being warm and welcoming—quite the opposite. That church has tried and convicted one of its clergy for violating church law—a law that forbids clergy from marrying couples of the same sex. In effect, that church has punished one of its members for showing love and compassion.

I struggle with being a member of these two churches, and I know I’m not alone. Can I go along worshiping and working in the church that ministers to everyone while, at the same time, being a part of that other church that excludes, judges, and condemns? I don’t know.

A couple of Christmases ago as I entered Trinity for the candlelight service, I saw one very bright star alone in the sky right over the church. I thought, of course, of the Magi who were guided by the star. This Christmas I will pray for that light to fall on both of my churches.

My church -
not the closed inn doors
but the welcoming stable.


Posted by Jane Schneeloch at 6:00 PM No comments:

My “swimming pool” was a metal tub, about 3 feet wide and 5 feet long, made of galvanized steel. The outer surface was painted a light green. My grandfather had constructed it for my father years before. It was stored in the loft of the garage in the winter, but in the summer it was brought out and filled with water. Clearly there was no way, even at 7 or 8, that I could swim in it, but it served as the perfect place to splash around and cool off on hot summer days.

They were not the only ones wary of swimming pools in those days. Summertime meant hearing about children paralyzed with polio, seeing images of iron lungs, and feeling a growing panic about this disease. Many parents saw swimming pools as a breeding ground for this disease. When I invited friends to join me in my “pool,” some of their parents wouldn’t let them come.

Polio was scary, but not an unfamiliar word to me. My father didn’t talk about it much, but my mother told me about how he had contracted it as a young man. His father worked with him daily to try to restore him to health, but, in the meantime, he lost his job at Mass Mutual, and his girlfriend at the time left him for another man. (My mother always told this part with a smile).

While I was splashing around in that steel tub, I never made the connection that this had been a place of healing for my father, that this tub had been made for him by his father as a place to work his muscles in an effort to save them. It must have been a painful experience for both of them. It cannot be easy to purposely inflict excruciating pain on your only child.

My grandfather spent day after day working his son’s muscles. My father told me once that one of the happiest days of his life was when, after week upon week of work with his father, he had been able to move his arm just two inches away from his side.

By the time I was born several years later, my father showed no effects of the disease except for the spot at the base of his thumb which was concave where the muscle had atrophied. All those days my grandfather and father had worked together had paid off.            .

When I remember that green tub now, I remember less the summer days I spent cooling off in it, but more of the love and dedication of the two men it represents.

Posted by Jane Schneeloch at 11:47 AM No comments: