I am taking a Spanish class. It is not my first. I took two years of Spanish in college, but didn't get a lot out of it. This short class is designed to help those of us going on a mission trip to Nicaragua become somewhat conversant. I was pleasantly surprised at what was still residing deep down in the gray matter, and discovered again how my French (3 years of high school French) keeps intruding on my Spanish. 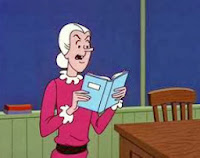 I wish I had continued my French in college, but I didn't feel prepared. The teachers I had for my first two years of French were excellent. First there was Miss Accorsi at Forest Park Junior High.  Remember Miss Grundy from the Archie comics? Replace the frown with a patient smile, color the dress gray, and that's Miss Accorsi. She may have looked like something out of a comic book, but she was the real thing. For the first six weeks of class we had no books, but learned to converse extensively about les crayons et les cahiers before we opened nos livres and began to learn about the difference between passe’ compose' and l'imparfait. 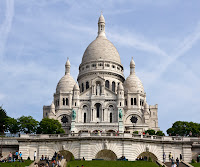 At Technical High School  Miss Roy made French fun as we heard
about her trips to Paris, sang songs, and learned about Edith Piaf. I even, and I find this hard to believe myself, wrote a sonnet in French in her class. Sadly all I remember about French 3 was that Miss Murray had short bleached blond hair, on top of which she had a huge bow, making her look like an overgrown kewpie doll—the extreme opposite of Miss Accorsi. So when I had to pick a language in college, I picked Spanish.
I wish I had continued with my French so that I came to know it really well, or else had started out with Spanish in the first place. As a result of knowing a little French and even less Spanish, I am envious of those who speak more than one language well. And what really annoys me are people who see their monolingualism as a badge of honor, insisting the rest of the world speak English. At the school where I taught, we had students from many different countries who spoke numerous languages. Many of them spoke several languages, yet others were critical because their English wasn't perfect.


Put aside the fact that being able to converse in more than one language is an advantage over frowning and waiting for an English translation. English is not an easy language to learn, and I say that as an English teacher and someone who loves the language. First there is the spelling. Why in the world should cough be spelled c-o-u-g-h when off is spelled o-f-f? Then there are those crazy words that are their own antonyms like left. It can mean that someone is gone, or what remains. And when the cops on TV dust for fingerprints, how is that not the same as what they're doing on the Pledge commercial? Adding dust or taking it away?


Being a lover of the language, I enjoy reading dictionaries, seeing the roots of words. Knowing the word's story, knowing, for instance, that the word sinister comes the Latin meaning left--oh, yes, there's yet another left--this one meaning the opposite or right-- which has several other meanings. Oh, it's all a wonderful mess of a language. From the little I know of other languages, I suspect they are not as complicated, which is why I admire those who really can speak more than one. Now back to los libros.