As I watch the Food Network’s Chopped where four chefs compete to create three courses from separate baskets of strange ingredients, I am reminded of my mother who put together so many meals—sometimes standard, sometimes unique, but almost always delicious. 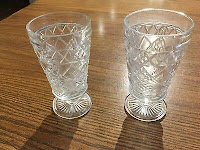 There were the formal Sunday dinners where the roast would be in put in the oven before we left for church, and upon our return, we would each set to our duties. My job was to set the table in the dining room using the good dishes (purchased at the church rummage sale) and the best glasses (which originally had held Big Top peanut butter). My brother helped to fold the napkins. After the roast was removed from the oven, my mother would set about making gravy from all the wonderful drippings in the roast pan. My father usually mashed the potatoes and cut up the roast. There were vegetables, of course, warm rolls, and usually a relish tray.

On regular week nights, dinner was simpler. We ate at the old oak table in the kitchen with the everyday dishes and glasses. Perhaps my mother made meatloaf or chicken or spaghetti, but towards the end of the week there were always the leftovers to deal with. My mother had two methods of dealing with those.

Sometimes she would take out the large Revereware frying pan, fill it with water, and assign each morsel to its own custard cup and place it in the pan to warm. Then we would bring our plates to the stove to select from the “buffet.”

But my favorite nights were when she did her own version of “Chopped” and created something new from whatever was in the refrigerator. She worked her magic mixing together what had never been combined before. The results varied, but many times they were exceptionally good, and we would rave about her original creations. To which she would always say, “Don’t ask me to make it again.” It was a one-of-a-kind, once-in-a-lifetime creation.

I’m thinking now that there should be a spin off of Chopped where the chefs get plastic containers of leftovers to work with. My mother could have won that contest easily!