A Toast to Rolled Up Sleeves 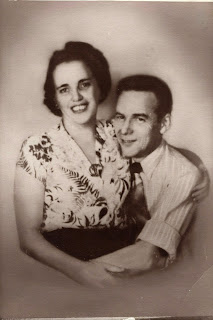 This is my favorite picture of my mother and father. It was taken on Thanksgiving 1950. My cousin Alvin took this picture as well as another of my grandparents on that day. My grandparents sit in front of the picture window of our house on Lancaster Street--very formal, half smiling .  I realize now that my grandmother would die just three months later, so possibly she wasn't feeling well.

The photograph of my parents, on the other hand, shows them smiling brightly with my mother sitting on my father's lap. The picture clearly expresses the closeness and deep love they had for each other, as well as a spirit of playfulness.

It wasn't until many years later that I noticed something else about the picture. My father is dressed formally, wearing a necktie, but the sleeves of his shirt are rolled up.

Perhaps I didn't notice it before because it seemed quite normal to me. My father's sleeves seemed always to be rolled up. He was always in the middle or working on something. Here I imagine he was helping my mother get the dinner on the table.

My father, unlike many other men in that  era, did not draw a distinct line between women's work and men's work. If there was work that needed doing, he was there. I have joked in the past that there is a hard working gene in the Schneeloch line that seems to have skipped over me. My grandfather used to say, "A change of occupation is as good as a vacation," and that attitude seems to be true for my father and brother as well.

My father did not draw lines for leisure time activities either. He equally enjoyed woodworking and needlepoint, furniture repair and novel reading. I used to have a hard time buying Father’s Day cards because they featured images of fishing and hunting—neither of which he was interested in. I don’t think my Uncle Keith, who thoroughly enjoyed those activities, ever really appreciated my father’s alternative interests.

Growing up as his daughter, I developed a rather idealized view of what a husband and father should be. All of which may explain why I have never married. Fortunately, though, because he didn’t see such distinctions , he taught me how to use the tools on his tool bench, how to balance my checkbook, how to drive, how to hang wallpaper, how to change a tire, how to use a plunger, how to repair a light fixture, and many other things that have saved me from having to call a professional for the slightest problem.

So I raise my glass to all men who roll up their sleeves, pitch in whenever needed, and raise daughters and sons who do the same.
Posted by Jane Schneeloch at 3:28 PM No comments: