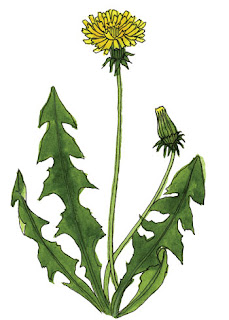 It's interesting what happens when you try to read on a dark morning with old eyes. I am reading Christian Wiman's My Bright Abyss where he writes about "grace through words," but I read, "grace through weeds." Maybe I had weeds on my mind, having pulled a few yesterday, both literally and metaphorically.

The real ones are profuse, following a week of intense heat, preceded by lots of rain. My friend Ken showed me how the thick stem of one unnamed intruder was able to store water enabling it to thrive in the heat. How clever nature is!

When I moved into this house 31 years ago, my next door neighbor, Sunny, was an inveterate gardener. She had all sorts of flowers and plants growing all over her small yard. She told me how to identify a weed: "If it's growing where you don't want it, it's a weed." Fields of dandelions growing on the sides of the turnpike--wild flowers, one persistent dandelion growing in the middle of my lawn--weed.

I thought of Sunny yesterday as I was working on a poem about trying to get to the essence of trees, but being frustrated by all the chatter in my mind. Words, ironically, were getting in the way of my poem. I started out using the image of music and trying to hear the melody beneath the lyrics. Then (maybe I was getting angrier) I started to look at these words as weeds, and I wanted to yank them out. The result was a poem starting with one image and ending with another. I had to sacrifice one. I decided on pulling the weeds out of the poem. They weren't growing where I wanted them.

Grace through words, it seems, comes from being open to recognizing what is grace and what is weed.
Posted by Jane Schneeloch at 5:48 PM