Back from Oz and the Bing 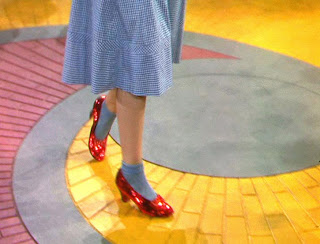 Many mornings after I've leashed up Riley and start out, I say, "We're off to see the wizard." Of course, there is no yellow brick road, and we're usually just heading off to work, but the lines, images, and themes of that classic movie The Wizard of Oz  are a part of me, and, I suspect, most of us.

Last week I watched it again for the first time, for like all great stories it is new each time. Sometimes it's the lessons of brain/heart/courage that stand out for me. Sometimes it's the longing for "Over the Rainbow" (still my favorite song). Sometimes it's the contrast between black and white Kansas and the brilliant Technicolor of Oz. This time I was particularly aware of the fact that this film was released in 1939 during the Depression. 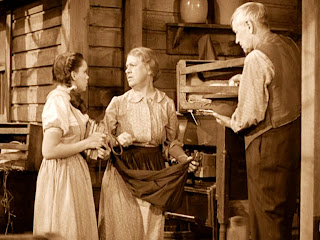 After Dorothy's first encounter with Miss Gulch, she runs to Auntie Em for help, but Auntie Em and Uncle Henry are busy counting chicks. As a child sitting in the Bing theater, I didn't have much sympathy for the adults. How could they not see that Dorothy needed them to listen?

All these years later I see two adults (two adults who are not her parents) trying to eke out a living in the middle of the Dust Bowl.  Every chick was essential to survival. Miss Gulch was wealthy and powerful. Em and Henry didn't have to be carried off in a tornado to understand that life was precarious.

Now that I've watched it again, I find there are lots of themes to delve into in this story. You may hear about this again.

Posted by Jane Schneeloch at 6:07 PM