Ever since I stood beside my mother at the counter on Lancaster Street, I have enjoyed cooking. Living alone, I don't often try exotic recipes, but being a fan of Food TV, particularly Giada De Laurentiis, I get ideas for things I'd like to try, but it's even better when a friend serves something I enjoy and offers me the recipe. That's what happened recently when I complimented a friend on the squash soup she had made.

I looked over the neatly printed card she sent to see what I had on hand and what I needed at the store. I had some homemade chicken stock in the freezer, so I took it from its Zip lock bag and put it in a shallow dish on the counter next to the stove to thaw out overnight. The next morning there seemed to be a lot less stock in the bag. When Riley scooted by me to start licking up the puddle on the floor, I realized what had happened. The bag had leaked! He did a good job of cleaning up what was visible, but it had run under the stove, so I had to pull out the stove (always fun) and mop the floor underneath it.

Then I was off to the store to buy the other items I would need: squash, tomatoes, cannellini beans, onions, and, of course, some canned stock. After returning home I put the kettle on to make myself a cup of tea while I put the groceries away. Soon I smelled something burning. I thought maybe it was something from a previous cooking adventure that had stuck to the flat surface. No, upon lifting the kettle, I found the recipe card--now black and flaming around the edges. Quickly extinguished, it was deposited in the trash. Now I had to imagine exactly what it had said.

Tonight was chilly—a good night for soup, so I set out to make some sort of soup with the ingredients I had. I've made soup before. I can do this. So what if I don’t have the recipe. My idea was to sauté the onions, garlic, etc. Then I would put everything into the slow cooker and let it go.

While I was sautéing the onions and garlic, I poured the stock into the slow cooker. But as I was pouring it in, I knocked the top of the slow cooker on the floor where the handle broke off. It's important to know that this is the NEW top to the slow cooker that I had just replaced a couple of months ago, having to order it online for some outrageous price. It wasn't my fault that time. The screws that held on the handle became corroded and broke. Seems like a design flaw to me, but not a battle worth having. 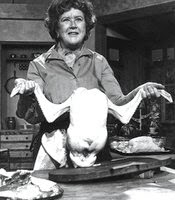 Well, it's all in the slow cooker now, covered by the top with no handle that I have to wedge open with a knife. I just hope it's worth it all.  Sometimes I miss Julia Child and her chicken that fell on the floor.
Posted by Jane Schneeloch at 7:37 PM