When I heard yesterday of Jeannine Belisle’s death, my mind was filled with so many memories. We worked together for 21 years. For most of that time she was a vice principal, then later principal. For all of that time I was an English teacher. I never wanted to be an administrator, especially not a vice principal. I wasn’t cut out for a job where one dealt almost exclusively with problems and the students and staff causing them.


Few people are cut out for the job. Jeannine was the rare exception. Janeula Burt summed it up well. She was “fair and impartial, stern yet compassionate,intimidating and funny,” and, I would add, sometimes all at once, like the day I had captured a white mouse someone had let loose in the suspension room. I dropped the rodent into the envelope used for attendance and brought it to Jeannine’s office. (Where else?) After a good laugh, she returned Micky to the science lab, and hunted down the abductor who turned up the next day in suspension, but this time sans mouse. It’s easy to see why so many former students were remembering her so fondly on Facebook today.


I was fortunate to know her on another level. We were both single women who loved our siblings’ children. From time to time we would sit in her office and 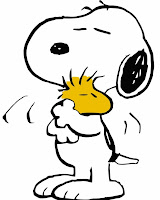 just flat out brag—she about her nine nieces and nephews, and me about my four nephews. She had a huge heart whose love seemed boundless. She also had a wicked sense of humor. She wore sequined sneakers to caf duty. Her office was covered with Snoopy and Charlie Brown posters, and in private could tell some very funny stories.
Jeannine was also extraordinarily generous. When one year I gave her a Winslow Homer calendar, she turned around and presented me with one of her original water colors—a copy of “On the Cliff” that I had admired. Every year when I reached out to friends and family to support me in the American Cancer Society's Relay for Life, Jeannine was always there with a check. Sadly, cancer was something else we had in common.
In the past several years I’ve been able to keep up with Jeannine on Facebook. Her entries were mostly about getting together with family and friends, traveling to Maine, enjoying lobster, and always her visits with Rosa. It was on Facebook she said that the cancer had returned. When I hadn’t seen a post in a while, I suspected the news was not good.

The last post I saw from her was, “I’m fighting.” I believe it. Jeannine was always fighting to get everything out of life that she could, and, in the process, she made life so much richer for those of us who were privileged to know her.
Posted by Jane Schneeloch at 3:11 PM