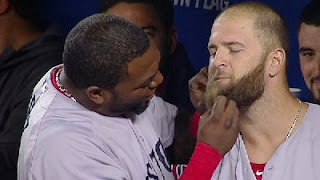 Apparently some fans are upset about the facial hair that the 2013 Red Sox have been growing, and growing, and growing. I don't particularly like the longer versions a la Mike Napoli, but the more trimmed ones like that on the chin of David Ortiz are fine with me. But, really, can anyone who is a true Sox fan have anything to complain about this season? Really? After the debacle of last season, really? Beards? Come on.

I have been following the Sox since the crack of Ted Williams' bat came out of the little red radio in my parents' kitchen. As part of the Fenway Faithful, I have learned a lot, and not just about baseball, but about life. Until that glorious day in 2004 when they broke the curse and won it all, cheering the Red Sox was an experience of continuously dashed hopes. Over and over and over we would hear the scouting reports from Florida and begin to believe that this would be the year. The season would have its ups and downs. If we made it into the playoffs, we' d begin to really hope that this year would be different. Then catastrophe! Mention the names Bucky F. Dent or Bill Buckner in front of a Sox fan, and you'll understand that you don't have to fight a war to have PTSD.

I've always thought it was significant that baseball season starts around the same time as Easter. Seeing all those guys with their new uniforms running out on the green green grass, it is like a rebirth, especially in 1979 and 1987. Hope is alive again. We believe again. Everything is possible in April. Being a Sox fan means believing again, despite the memory of crushing defeats. Off-season is a time to forgive and almost forget.

This tendency to forgive a lot has led me to make a few bad decisions, but enough about my love life. It has even (I can't believe I'm going to say this) made me feel a little bad for Yankee fans this year. They expect to win, to be in the playoffs. They don't have the scars that we do. They don't really understand, "Wait 'til next year."

I don't know whether the Sox will go all the way this year, though I certainly hope so, but I do see something similar about this team and the "Idiots" of 2004. They are a TEAM. They are not a group of stars. They pull for each other, and, yes, they pull on each other's beards. The beards are a sign of their kinship, so whether they are long or short or bushy or straggly, I say go for it.  Enjoy the game, enjoy each other, and go out and win one for the team...and those of us in Red Sox Nation.

Posted by Jane Schneeloch at 12:23 PM