Feeding and Being Fed

The truth is I didn’t want to go that Wednesday. It was dark and cold, and I really just wanted to stay home, have bowl of soup, and take a nap. Then I thought about the people who were already lined up on this wintry day just waiting for us volunteers to distribute the food brought with the Mobile Food Bank.

Sponsored by the Food Bank of Western Massachusetts, the Mobile Food Bank comes to Trinity United Methodist Church on the first and third Wednesdays of every month. The truck arrives about 1:15 full of food that has been donated from local farms, stores, and the government. The driver unloads pallets of potatoes, onions, squash, or whatever the fare is for the day. We volunteers take up a station in front of one of the pallets and proceed to pass out the food to the people in the line.

On our busiest days there can be more than 300 people representing a virtual United Nations including Mexico, Nepal, Pakistan, Greece, and Russia. There is no charge for the food, and the people who come are only asked the number and ages of the people in their household.  They come on the hottest days of the summer and the coldest days of the winter. And they wait patiently--very patiently.

On that Wednesday I was handing out beets—4 large beets per person. Quite a few turned them down, but several smiled brightly when I suggested they could make borscht. Once I began dropping the beets in their bags—some flimsy plastic, others more sturdy from Big Y, and some backpacks on wheels—I remembered why I like doing this, even when the weather is not pleasant. Everyone is so grateful. One after one, they smile, say thank you, God bless you, and, in return, I cannot help but smile back. 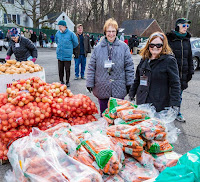 There are some regulars I recognize like Max who is Russian. I discovered awhile back that he is an amazing pianist. I smiled and asked if he was doing well, “Not good,” he said, “excellent!” Ann usually comes with her youngest child and always greets me with a hug. I am fed by these people who come here for food.

It was a slow day. Maybe people were still dealing with the aftermath of the recent storm. It gave us a little more time to talk to the people coming through the line. When an older man in a gray flannel shirt held out his bag for me to drop the beets in, I could see that he’d been crying. I asked what was wrong, and he just kept repeating, “I’ve lost everything.”

What does one say to that? The words I uttered—I’m sorry—felt insufficient. He told me then that his wife had died of cancer. Then he repeated, “I’ve lost everything.” He moved on to Kathy who was passing out carrots, and I could see that she was tearing up. I gave him a hug before he left. What else could I offer?

I hope we see him again, but I may never find out his whole story. There are so many stories behind all these faces. Most of these people would be labeled poor. To stand in line for hours to receive several pieces of food would seem to support that.But  there is a richness to be had in hearing people’s stories, in touching another human, in sharing smiles on a cold day.

I was glad I went. I went home feeling much richer.

Posted by Jane Schneeloch at 8:04 AM