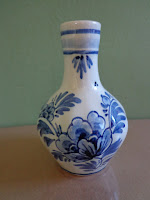 I was 28 when I first traveled to Europe. Our first stop was Amsterdam. I was excited about visiting the Van Gogh Museum that had just opened the month before. I looked forward to visiting Delft and picking up a piece of Delft Blue earthenware, but maybe more than anything else in the Netherlands, I wanted to visit the Anne Frank House.

I was born after the war in Europe was over, so what I knew of the Holocaust was limited. Two things, however, had affected me deeply--an image and a sound. The sound was that wailing siren in the 1959 movie The Diary of Anne Frank. Even after the closing credits, as I was coming to grips with Anne’s ultimate fate, that piercing sound of the siren kept screaming in my mind, continuing to echo for years afterward.

The image was much closer to home, just two houses away, in fact. That’s where the old rabbi and his wife lived so they could be within walking distance of the synagogue. At that time there were two Orthodox synagogues in the neighborhood, and it was common to see families walking up and down Sumner Avenue going to services on Friday nights or Saturday mornings.   One day as I happened to pass the rabbi and his wife going to services, I noticed it—the tattooed numbers on her arm. I knew immediately what they meant: my neighbor, the kind woman in the white house now walking peacefully to shul, had been branded, imprisoned, and designated as less than human. The only difference between my neighbor and Anne Frank was that my neighbor had survived.

I thought of her as I arrived at the Anne Frank House. Built in 1635, just a year before the city of Springfield was established, it is a four-story house, and like the other houses on Prinsengracht, is nudged in between two other similar houses facing the canal.

We followed our guide into the house and up a narrow stairway, then through a narrow passage, and past the faux bookcase that hid the entrance to the annex. Here Anne, her mother, father, sister Margot, the Pels family, and Fritz Pfeffer had hidden for two years. Through this passage Miep Gies and others risked their lives day after day smuggling in food and news until August 4, 1944, when the Gestapo arrived, arrested them all, and took them away to their ultimate fate.

The rooms seemed empty and stark, that is until I went into what had been Anne’s room. Here on the wall of her room she had pasted pictures from movie magazines: Sonja Henie, Ginger Rogers, Greta Garbo. I immediately remembered myself at 13, how I loved reading Photoplay and hearing about my favorite stars, especially Debbie Reynolds. Then I remembered cutting out her picture from the newspaper when she married Eddie Fisher. And I remembered pasting it in my scrapbook, just as Anne had pasted these pictures on the wall here. 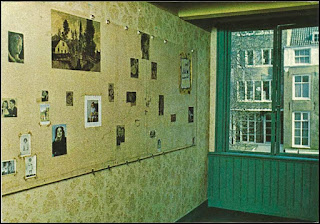 From that moment on Anne Frank was no longer a name in a history book. She liked to write. She liked to read about movie stars. She was someone like me. Had I known her we might have been friends.

That's when I heard the piercing siren again.Who were they coming for this time?

Posted by Jane Schneeloch at 9:59 AM