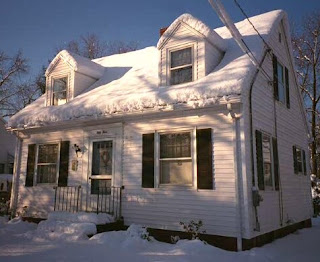 I bought this house in 1982. From the moment I opened the front door, I knew it was mine. The modest size, the Cape Cod style, the East Forest Park neighborhood--all reminded me of the home where I grew up on Lancaster Street just a couple of miles away. Add to that, the fact that the house at the end of the street had once been my father’s boyhood home, and his grandfather’s farm had been just a ways up Allen Street. It seemed I was destined to call this place mine.

That’s not to say I loved everything about the house when I moved in. The garage was a problem. It was settling, and the door was rotted. Still I was happy to have a garage at all, never before having been able to shelter my car from New England winters. The kitchen was the worst problem. There were only four cabinets and very little counter space. The dropped ceiling hid water damage and dangerous wiring. Then there was the mural—a turquoise scene of peasants dancing around a pagoda. I’m sure previous owners thought it was beautiful, but it annoyed me every time I looked at it.

Little by little over the years, I fixed, repaired, revamped, and expanded.  Early on I had a new floor poured in the garage. That was after my father laid a new cinder block foundation, jacking up each wall of the garage as he did. My nephew Thomas re-tiled the bathroom and closed in the side porch. New wall-to-wall was installed, as well as new flooring in the kitchen.

In 2005, after living with this kitchen I really hated for 23 years and the inconvenience of one bathroom on the second floor, I took on a major renovation of the kitchen, as well as the addition of a family room and a downstairs bathroom. This meant the mural was finally gone! 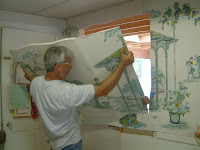 Each owner likely thought of my house as their house, and someday, I suddenly realized, other people would come into my house and make it theirs. At first, this thought made me angry--as if some anonymous person would steal what was mine. But, of course, that was silly. When the next owner arrives, he/she will do so either because I have relinquished ownership of the house or my life.

Barring fire or other tragedy, this house will remain when I have moved on. Other people will paint the walls a different color, move in new furniture, and find aspects they dislike (But not the mural!). They will create their home in this space where I have created mine. I wish them and my house well.

But I’m not planning on leaving quite yet. I still have to fix the doorknob to the porch, and repair the threshold at the front door, and the find out what’s causing the water spot on the ceiling of the family room and maybe paint the family room a different color, and...

Posted by Jane Schneeloch at 7:59 AM