There is an ongoing drama in my yard--a sort of soap opera that I watch from the window by my breakfast table.

I slept a bit late this morning, so as I tuned into the story, it was already going on. The house 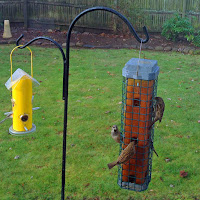 sparrows and the hairy woodpecker were already working busily at the perches on the sunflower seed feeder when a dark shadow zoomed in from the north. Before I even noticed its approach, every one of the birds flew off to their secret places. The shadow, it turns out, was nothing but a very chubby pigeon. He’s a new character on the scene. He usually hangs out on the roof line of the taller houses on Powell. What brought him here? Was he just trying to intimidate the smaller avians, or was he unaware of their presence. After he scouted around the grass and found nothing of interest, he flew off, 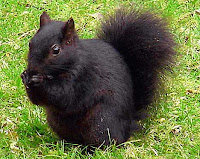 The next character on the scene was a black squirrel. The gray squirrels are regular visitors and provide the comic relief to our drama. They are in constant action. Whether chasing each other in circles around the trunk of the tulip tree or running along the ridge of the garage roof, then jumping into the hydrangea, they never cease to entertain. But the black one is new. In fact, black squirrels are not indigenous to the region, but were brought here from Michigan in the 1940s as a gift to Stanley Beveridge, the founder of Stanley Park in Westfield, so became a feature there, but now have spread out through Western Massachusetts.

Should we be suspicious of this alien? What’s he really up to? Was he the one that scared away the cardinal family who nested in the hydrangea this summer and have since disappeared?
Or did they just move to a classier neighborhood? We’ll have to keep our eye on that one.

Just now a gray squirrel has found a favorite spot on the hydrangea that was carved out by the woodpecker--a small hole just the right size to store a peanut or a few sunflower seeds. The hole grows larger with each peck and retrieval. How much can the old bush take?

Most of the drama happens offstage, and that is the mystery of it. It keeps us guessing.


Tune in tomorrow to see whether the long, dark, and handsome black squirrel turns out to be a hero or a villain? Or who will retrieve the treats in the hydrangea first, the titmouse or the squirrel? And will the cardinals return?
Posted by Jane Schneeloch at 2:20 PM