Strawberries on My Oatmeal on the Summer Solstice 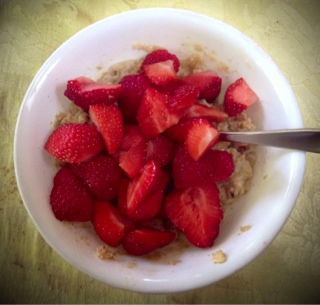 Driving home from Westfield the back way, I passed a sign that I can rarely resist: Native Strawberries. These signs start popping up here in Western Massachusetts early to mid-June. They promise  access for a short time to these sweet red mouthfuls of deliciousness. The Big Y or Stop and Shop may offer something called strawberries every day of the year, but those are alien berries seeking asylum from someplace called Driscoll. No, the native berry is distinct, sweet and deep red through and through.
Strawberry season is followed shortly by raspberries, then peaches. When the apples start coming in, it's time to put on sweaters and drag out the rakes. Today is the first official day of summer, so I have been thinking about seasons--fruit and otherwise. Clearly everyone on this planet is aware that there are four seasons, even those Aussies who are now heading into winter. Living in New England, though, seasons are more obvious. We avoid them at our peril.
Seasons mean change, whether moving from strawberries to raspberries on my oatmeal, or moving all the porch furniture back to the garage and moving the potted plants indoors. If you live in a climate where seasons are distinct, you accept this, or grumble and talk about moving to Florida.
Thinking about this the other day, I came up with a question: Is there a connection between the fact that the northern part of the country tends to be more liberal and the South more conservative and the seasons? Does the fact that living in the South doesn't necessitate change in everyday living mean that those who live there are more resistant to it? Hmm, still contemplating this one. Now back to my oatmeal.
Posted by Jane Schneeloch at 5:15 AM